Topics I write about

Welcome back to another ARM blogpost. Again, the picking choice was hard on this one, having just witnessed the global celebration of Record Store Day and being forced to set aside other recent releases such as Alabama Shakes‘s Sound & Color or even waiting just for another bit before the highly anticipated The Desired Effect by Brandon Flowers and My Morning Jacket‘s The Waterfall would have been published. Yet, partly because of my past (and present) blink-182 and Angels & Airwaves (AVA) fandom and party because of the recent publicly aired band drama causing quite an uproar, I felt like I had to give Tom DeLonge’s first ever solo album To the Stars… Demos, Odds and Ends a try.

Freshly released in Europe’s mainland a day ago (21st April), the half-EP half-LP is allegedly containing blink-182 demos “along with a few extra tracks”, summing up to a total tracklist of 8 units (-1, considering instrumental filler “Landscapes” as a non-song). The album had already been sort of previewed by the anticipated release of singles (?) “New World” (to which a very angst-filled music video has been dedicated), acoustic ballad “The Invisible Parade” as well as skateboarders’ new anthem “Circle-Jerk-Pit” (which, not surprisingly, soundtracks a video made of skating pools, beers and pretty girls). With the exception made of the latter, which is almost too messy to be properly understood, the two songs Tom decided to release before the actual full-album publication are, sadly, in fact the only remarkable compositions present on the effort. Fluctuating between AVA nostalgia (“Suburban Kings” could’ve easily been born out of “Rite of Spring”‘s ribs) and quite embarrassing blink-182-success formulas (“Golden Showers in the Golden State”: “First Date” and “The Rock Show” anyone?), the album doesn’t appear to be able to take a shape on its own, even after repeated listens. I’m actually saying this with genuine disappointment, being a long-time DeLonge fan myself and having always appreciated his ability to reunite big melodies with compactness and effective lyrics.

To be fair, the record itself got in fact promoted as a kind of B-sides bucket of his, possibly intended as a concrete and material response to blink-182’s intentions to continue as a band even without him (Alkaline Trio’s Matt Skiba has so far replaced Tom on guitar and vocals in the line-up). Still, this isn’t probably the best self-esteeming reply Tom could have given to both his previous bandmates and the public/fans at large. Why not waiting a little bit more and instead releasing another solid AVA album like last The Dream Walker, maybe with a little help of his (new) friends (Ilan Rubin)? Directionless, at times dull and repetitive, “To the Stars” doesn’t really deserve to get associated with his songwriting abilities (maybe with the exceptions made for the aforementioned “New World” and “The Invisible Parade”), not least because even initially-promising “An Endless Summer” and “Animals” turn out, unfortunately, to be truly dislikable with time. Ok, “Suburban Kings” and “Golden Showers in the Golden State” aren’t bad songs at all, but they nonetheless sound desperately over-heard and too familiar to past successful attempts of his.

This one seems to be an extremely busy year for Tom, according to his own statements to the press (announcing the release of 4 albums and 15 co-written novels all this year, come on…), and while he’s always been someone who doesn’t necessarily like to take breaks between musical, cinematic, and entrepreneurial projects, his explicit plans appear to be too ambitious even for a persona like his. Probably, hadn’t he released this very album, he could’ve managed and allocated his resources more wisely into a more thoughtful product, ideally released later this year or even during the next one. Yet, sometimes the urge to respond to unclarity and defeats can be stronger than anything else, pushing its way through light and converting into forced pieces of art. The result in this case? Tom still De…longing for blink-182.

“TO THE STARS… DEMOS, ODDS AND ENDS” 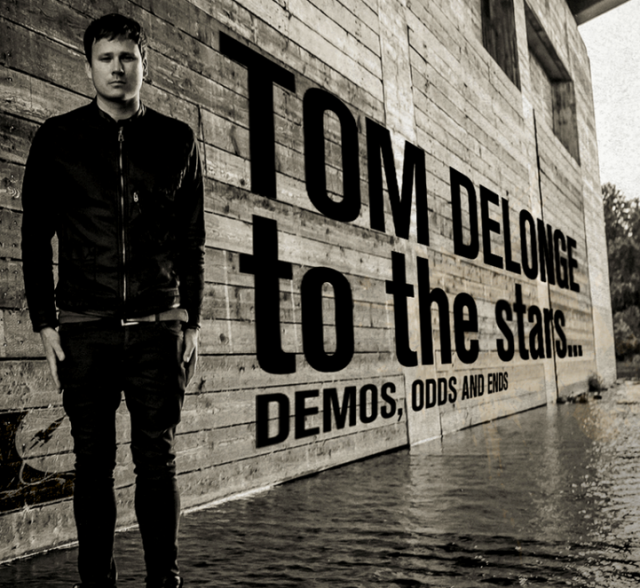