Now that Notes from Barcelona – the Punktastic-hosted featured column series about the alternative/heavy live music scene in the Catalan capital – has finally pulled its editorial curtains and wrapped up a wonderful twelve-months of steady correspondence, expect this site to get even more flooded and infested by fierce jazzy music reviews, in addition to perhaps scattered musings and banters regarding books, TV, and cinema content here and there. For this reason and with this premise, partly because noblesse oblige, partly because of the topical relevancy of the significant subject matter, some time and space ought to be devoted to a recently released album which is almost too big to fail (and therefore ignore). What I’m referring to is none other than Sir Paul McCartney’s latest and 18th enthralling studio album Egypt Station, an opus work of art masterminded by influential and skilled producer Greg Kurstin that has unconditionally and inevitably been on heavy rotation on EMS’s playlists and mixtapes, almost exactly ever since its release on the past 7th September. Yet at the same time, conflictingly, the team here (?) is wholeheartedly, platonically, and consciously aware that one can’t simply review a Macca album as if it were nothing and just get away with it. Some appraisal tasks are bigger than one’s self, and with recording and performing acts like the Beatle par excellence, there simply comes a point where he transcends whichever semiotic symbolism (read: language, words) critics and reviewers might opt in to use in order to attempting at describing inherent artistic virtues, or lacks thereof, of any given creative endeavour by Sir Paul.

With that being said, the only thing I’d like to highlight and stress out, before embarking onto the actual music unit of analysis of the present critical assessment piece, is that the way Paul McCartney crafts and produces compellingly honest and raw storytelling through ornamented and layered melodies still goes unmatched. Much like a modern day raconteur or peasant minstrel distributing wisdom to his fellow villagers via insightful passages, Paul’s ability, or rather virtue, to construct simple yet universally addressable messages by way of simply-packaged and digestible power pop narratives is extremely sticky, and gains intrinsic value by the listen and by proxy of shared experiencing. Case in point, the tear-inducing and heart warming sly confessional of “Happy with You“, or the gracious and harmonic aesthetic of the very Beatles-esque “Dominoes“, all the way to Egypt Station’s more contaminated, experimental, and slightly left field cuts “Back in Brazil“, “Despite Repeated Warnings“, and album closer “Hunt You Down / Naked / C-Link“. No, ladies and gentlemen, I shall repeat myself, this isn’t a review in any shape or form, but just a testament of adulation to the biggest songwriter of our time and to his ability to instruct us all as to how to make sense of the world around us, almost since the world itself began, as Rolling Stone kindly points out when blasphemously reviewing the record: “Make a list of all the songwriters who were composing great tunes in 1958. Now make an overlapping list of the ones who are still writing brilliant songs in 2018. Your list reads: Paul McCartney. Sixty years after ‘Love Me Do,’ his legend already inviolable, Macca keeps adding new gems to his songbook, with nothing to prove except he’s the only genius who can do this“.

Now, the main LP getting dissected and scrutinised in this article actually has more in common with Paul and the Beatles ecosystem than one might imagine at first. Yes, because sensational rap/hip-hop collective BROCKHAMPTON’s fourth album iridescence was in fact recorded and produced at London’s Abbey Road Studios in just ten days, and no one needs reminding how that is linked to the Fab Four. So let’s not kid ourselves and act as if this isn’t a big deal. BROCKHAMPTON, the hardest working boyband in show business and arguably the biggest revelation to come out of 2017’s Western underground/indie/DIY artistic underbelly, conceived their incredibly highly-anticipated (and frequently retitled) follow up to the fantastic and critically acclaimed Saturation trilogy inside The Beatles’ legendary creative hub, and no one bats an eye? Well, in fact, many did bat an eye and because of that, many a stories came out in the run up to the album drop on 21st September, all fuelled by a wide variety of juicy, noteworthy, and controversial discussion topics, ranging from the queer group’s revelation and stellar rise last year to the unfortunate and regrettable exit of key core member Ameer Vann earlier this Spring, following a wealth of sexual abuse allegations put forward against him. What’s more, iridescence appears to be the first sonic instalment of yet another artistic trilogy dubbed The Best Years of Our Lives, to be issued by RCA Records (via their own production house Question Everything) after the Kevin Abstract-executively produced mega-group signed a much talked about deal with the Sony-owned imprint in March this year.

To be absolutely frank, the winding bias coefficient is not lost on me when approaching the artistic critical assessment of the fourth album of a performing act whose previous three full-lengths all featured in this site’s AOTY end-lists, during the same year. Nonetheless, the skilled and mixed race group’s influence and impact on the contemporary creative zeitgeist make for a kaleidoscopic perceived urgency that exists beyond any contributor’s personal preferences and warrants a judicial scrutiny all the same. Clocking in at just short of 50 minutes, and sporting a solid 15 tracks (including one and a half skits), iridescence kicks off with a grand slam in the listener’s face, with the fiery, hypnotic, and dingy “New Orleans”, sourcing top-notch deliveries by two of the boyband’s premier MCs, Dom McLennon (“When I die, these words gon’ need separate caskets in a hearse / I don’t rhyme, I freeze time and let these hands just do the work / I’m in tandem with my curse, going manic since my birth / See this canvas as I planned it, I’m commanding with my nerves“) and Matt Champion (“Bustin’ out the function, highly comfortable / Got this hot ting on my body, man my sweat lethal / Sweet kisses like the candy out the carnival / I’ma call my own shots, hit the audible“). After an unbelievably smooth and streamlined transition into what sounds like a Saturation-era-leftover, “Thug Life”, a powerfully dense trio of crunchy, distorted, and hectic cuts takes centerstage in this first half of the LP (“Berlin”, “Something About Him”, and “Where the Cash At”), lending a little too much messiness, although coupled with wonderfully intricate and layered vocal melodies, to the overall aesthetic. That said, the band’s mixing and mastering wizard Russell Boring aka JOBA’s outro on “Berlin” especially, is superior melodic songwriting, one that in the specific context of the moments of its happening takes the listener into a superlatively sweet, tender, and lucid direction after the intense and overwhelming sonic vortex populating the rest of said number.

“Weight” at number six on the playlist is an outstanding piece of compositional craft that virtually ticks all the boxes of best-in-breed modern hip-hop hit making, while at the same time marking a clear and distinct departure from the rap collective’s Saturation trilogy-universe: sound, theme, lyrics, production, delivery, structure, and flow. You name it, this song kills it. Moving on, the radically experimental and at times identity-less “District” wraps up side A of iridescence, glued together to its sister face by gorgeously pleasant filler “Loophole”, before diving into the grandiose and eerily dark-sounding and Radiohead-sampling “Tape” (on this one, take a moment to appreciate Kevin Abstract’s, JOBA’s, and Matt Champion’s damn fine flows and deliveries). Notwithstanding BROCKHAMPTON leader’s Twitter PSA warning, “J’ouvert” at number ten is the closest thing to a promotional single this project has got, and regardless of whether one wants to believe him or not, what a wonderful and striking choice that it. Everything from its tongue-in-cheek sound catchiness to each MC’s flawless vocal delivery, passing through the raucous, dangerous, and incendiary mood permeating the song throughout, “J’ouvert” hands down makes for one of the group’s most accomplished and astonishing tracks to date. What follows, “Honey”, is doubtlessly album peak to me, a stunningly creative and catchy patchwork that makes three minutes and change go by as if they were mere seconds. On this joint, heightened lyrical poignancy (“My people still dry snitchin’ whenever they touch the mic / That’s what happens when a therapist isn’t somewhere in sight / Take flight, never leaned to the left or the right / ‘Cause they turn the other cheek when our ni**as start to die“) gets coupled with fun and daring beats (that go as far as self-sampling Saturation’s chopped and screwed blasting gem “Bump” into a successfully reworked plug-in), but what takes this number up a millions notches is the unbelievably dreamy and heavenly elevating outro – or rather, second half – kicking in at about 1:35. Outta sight.

Across its final four tracks, the album isn’t able to match its top crown-y moments, unsurprisingly so given how much quality material is to be found distributed across the previous eleven cuts. Regrettably, the pale yet weird and chaotic “Vivid”, as well as dull and reductive album closer “Fabric”, lower the overall masterwork-status average of this record, only to be moderately counterbalanced in this late section by the stunningly robotic ballad “San Marcos” – curiously and un-intuitively inspired by the Goo Goo Dolls, still according to frontman Kevin Abstract – and previously unveiled lush and swanky tell-all dashboard confessional “Tonya”. All things considered, this major label debut and first instalment in the Best Years of Our Lives trilogy by the Texas-formed, LA-based collective represents a major flag in the BROCKHAMPTON career’s reign, a pivotal artistic landmark cradling inspired and gorgeously experimental sonic territory, forcefully navigated with the absence of a key founding member, but with a wealth of additional wisdom, depth, confidence, and virtue accompanying every steering turn and beat switch. iridescence is a fierce and dead serious candidate for a ton of further AOTY lists to come and a crystal clear conceptual delineation that the boyband isn’t comfortable simply resting on their Saturation laurels. Suddenly it doesn’t seem too crazy that, given ten days locked away in a quintessential Beatles reign creating on a 24/7 rotation basis, BROCKHAMPTON too might be eligible for the aforementioned Rolling Stone qualitative reasoning that worked so well for Macca. At least for now: “Make a list of all the songwriters who were composing great tunes in 2017. Now make an overlapping list of the ones who are still writing brilliant songs in 2018. Your list reads: BROCKHAMPTON”. 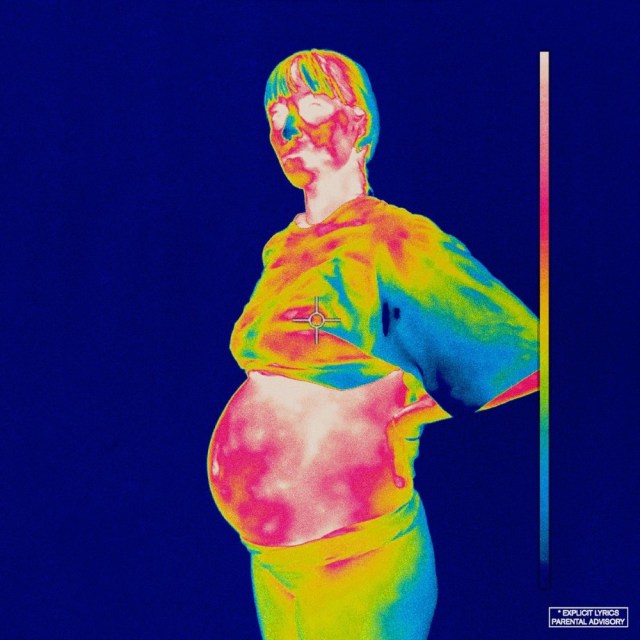