After a string of large and exciting open air festivals that have arrived with impressive regularity since May, it’s time to switch gears and turn to Barcelona’s smaller underground club shows. Larger, shorter, crowd-pleasing festival performances are rarely a match for the intimacy and artistic authenticity of a small venue gig. What better month to withdraw into searing and sweaty indoor environments in the heart of Southern Europe than during the hottest one of the whole year? Let’s get serious, agosto.

The search for urban entertainment and escapism seems more necessary than ever in the aftermath of the reckless and horrible attacks the city recently sustained. Whilst the live shows reported here all occurred before the terror attack on Las Ramblas on August 17, the relevance and importance of local live music establishments that offer collective enjoyment, help to restore serenity in town.

Barcelona and its surroundings offer a variety of interesting clubs and venues hosting live gigs, all generally active during the whole year, yet winding down a bit during warmer times to make space for mainstream festivals. The indigenous selection of concert halls range from the massive Palau Sant Jordi arena and FC Barcelona’s Camp Nou stadium to bars-turned-venues such as Sidecar and Manchester Bar.

Sala Razzmatazz – explicitly honouring the track of the same name by britpop group Pulp and simply known as Razz to the locals – is a venue that, true to its name, has generated the most traction and noise over time. A self-declared “flagship of the culture and leisure scene on the national and international scale,” the 3000 capacity club has been going for about 15 years, and is located in a fascinating construction amidst the industrial part of town of El Parc i la Llacuna del Poblenou.

Over the years a wide array of artists have taken to the Razzmatazz stage, from big names to fresh newcomers, and a quick look at their programming calendar suggests eclectic and fascinating booking choices indeed. The hall mixes its own curated schedule of Barcelonian acts with different national and international promoters, as well as “culture agitators”. Interestingly, Razzmatazz was also the first club in the country to offer entertainment programming across five different spaces (The Razzclub, The Loft, Lolita, Pop Bar, Rex Room) every single day of the week.

favourable early August schedule allowed me to check out the venue in person and attend a one-two heavy combo of live gigs by Brazilian thrash metal trio Nervosa and US death metallers Obituary. This made for an excellent package to experience the club in its alternative glory and as a cultural reference for the city.

Floridian five-piece Obituary need little introduction, having been on the metal scene for over 30 years. But Nervosa, from São Paulo, were a fascinating novelty to me, despite forming back in 2010 and already having released two studio albums (2014’s ‘Victim of Yourself’ and last year’s ‘Agony’) under Austrian indie label Napalm Records.

Obituary took to the Razzmatazz stage shortly before 10pm on a warm Wednesday night, not long after impressive local opening acts Dejadeath and Assot took care of warming up the crowd with a dynamic yet coherent taste of drop-D tunes and growls in sludge-y sauce. Of peculiar enjoyment were the opening bands’ quirky and high-pitched Catalan/Spanish spoken intermezzos in-between set songs, in sharp contrast to the brutal and ugly vocal delivery typical of their type of sound.

The venue’s quite restrained logistics and interior design carry undeniable multi-usage and inter-genre attributes, leaning themselves quite nicely to a death metal-filled concert line up thanks to its dooming and compact stature as well as pitch black coverture. The overwhelmingly sweaty, long-haired audience in attendance for Obituary’s master ceremony was clearly of a Spanish-speaking majority, which made for an authentic and refreshing break from the city’s touristic wave invading the warmer seasons. At the same time, such a connotation surely helped cement Razzmatazz’s reputation as an authentic Barcelonian artistic and cultural point of reference.

Only a handful of days after the US death metaller’s fiery performance it was time for Nervosa. The trio was supported for the occasion by Italian prog metallers Reapter – opening for Nervosa throughout their whole European tour – and local heavy metal veterans Deldrac, composing an ideal line-up for the Brazilian ladies’ main course. Nervosa are currently on their World in Agony summer-long tour celebrating their latest release, which alongside a string of six Spanish dates takes them to Germany, Italy, France and Russia.

Barcelonian four-piece Deldrac, whose one-hour long kick off show was largely glorified by the significant presence of a local fan-base, impressed for both band dynamic and entertaining temperament. With a biting live sound just about rightly proportioned to the room’s dimension (this time a way smaller one than the main room employed for Obituary’s show), Deldrac enjoyed an intense crowd participation despite a rather unfavourable slot on the evening bill, making the most of the obvious perks of playing a hometown gig. A couple of standout track performances led me to savour their sole, slightly rudimentaly produced LP to date ‘One Day More, One Day Less’, a move I would suggest to anyone searching for a new solid thrash record with Catalan blood running through its strings.

Deldrac were followed by Rome-based Reapter at 9pm, who carried on the night’s dances to a suddenly half-empty room whilst the other half of the crowd enjoyed a smoke break. However, this didn’t influence the band’s purist thrash and tight delivery too much. With a live vibe indebted to early records from thrash metal’s Big Four, the Italians played for a little more than 45 minutes, showcasing both decent technical skills and frequent flirts with melodic sounds. Reapter’s performance was clearly inspired by fringes of prog metal and championed by a mighty 6-string bassist who more often than not had all the spotlights on himself. At times though, one could feel that something was missing, perhaps more than anyone from frontman Claudio Arduini, who seemed less comfortable with the songs performed live that evening.

As soon as the headliners took to the stage just after 10:20pm, the two nostalgic, sonic trips down metal memory lane that opened the show, got fiercely completed, and for the greater part replaced, by shock and horror elements. Nervosa’s show was an aggressive explosion of primitive drums and meat and potatoes walls of sound provided by an undoubtedly thinly composed line-up.

Main vocalist and bassist Fernanda Lira made sure her incendiary vocal cords and five bass strings vibrated like there was no tomorrow, appearing to ignore any rational dosage from song number one in an almost neurotic fashion very true to the band’s name (‘nervosa’ being the Portuguese word for nervous). With an exhaustive setlist and an outstanding performance by drummer Luana Dametto, the Brazilians clearly stole the show. The group alternated lengthy solos with experimental bits, extending songs to longer durations with frequent interactions to a pleased crowd. Virtually all Razzmatazz attendees looked like they had their money’s worth for the evening and took the most out of the heavy musical programming. Obviously headbanging, moshing, and circle pits were aplenty.

While it’s always hard to provide absolute statements about local cultural movements, my first-hand experience at Razzmatazz confirmed that it is one of the places to be for alternative music in Barcelona. This is true for both new musical discoveries and established acts.

These two concerts certainly set the bar high, and you shouldn’t miss this venue, with all its noise and appeal as an urban razzmatazz, off your musical to-do list when in the Catalan capital.

Still, I’d urge you all to check out the source feature article directly on Punktastic too, as it’s wonderfully wrapped in shiny and fancy designs as well as relevant music discovery embeds that massively elevate the final product. More generally, go show them some love and explore all the incredible articles and reviews they publish, as it’s by far a much better site than this one and you won’t be disappointed. 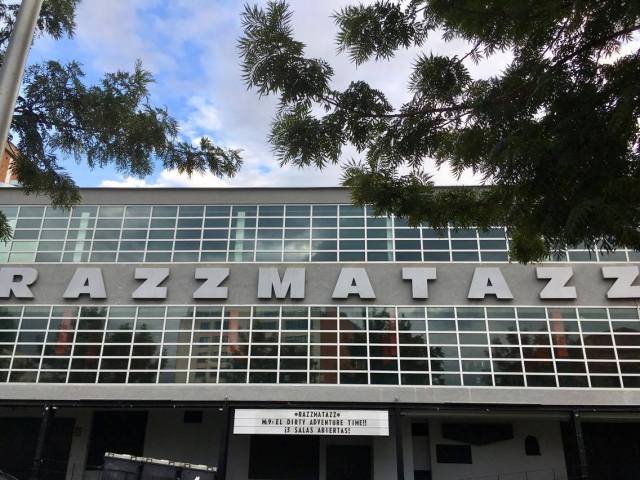