Just in case y’all esteemed readers haven’t noticed, I’m having a hell of a lot of fun at this so please excuse me as I continue to productively proliferate the meanders of this site with soon-to-be critically acclaimed featured review of selected popular music being released in 2018 (and beyond). To be completely honest with you, it would be hard to do otherwise, as all of us earthlings get inundated with tidal waves of exceptionally excellent new music as of late, especially more so after the Kanye West-architected five week G.O.O.D. Music label marathon, which began with the impressively astonishing Pusha T release Daytona and culminated just mere days ago, on Friday 22nd June, with the drop of Teyana Taylor’s mild and rather anonymous K.T.S.E. And by the way, who knows what else Ye and his camp have in store for us next, as history taught us numerous times that, albeit them being superior drops of ethereal wisdom, Kanye’s promotional tweets aren’t necessarily the most reliable and validated source to go by. Fun fact: for as strange, surprising, and peculiar as it sounds, this very ARM piece is actually the first official instalment dissecting one of said five album releases, even though multiple associated namedrops and mentions have indeed occurred throughout these very airwaves recently. So, whilst begging the pardon of you all music aficionados for the slightly dislocated delay in putting this one out – as most of you might already be aware of the original release date of this album – without further ado it’s time for a review of Kanye West and Kid Cudi’s new duo self-titled debut, also known as hip-hop supergroup Kids See Ghosts.

Actually, there is in fact some further ado, as I didn’t want to miss my chance to shout-out my man Jason Butler’s latest musical endeavour (of letlive. and The Fever 333 fame), in form of the raunchy and gnarly Pressure Cracks side-project, a punk-hardcore five-piece from Southern California that catapulted itself into the world with its eponymous EP at the end of May. It’s a radically bittersweet, fun, in-your-face, and formative ride through sonic highwaves of meat-and-potatoes hardcore angst, all encapsulated in a handy and modular 15-minute of punk fame journey spanning four tracks. Previewed by the aggressively dope and dynamically excellent “Be a Wolf”, all cuts on the project do bring something valuable to the table, from the break-down-filled electrifying opener “Collages & Collagen”, to the high-speed grit and kinky violence of closing number “No Yourself”, passing through the powerfully entangled and abrasive “Stay Inside, Stay Alive”, which also doubles as one of the few sporadic moments on the record showcasing interesting clean vocals motives by Butler, who I’m sure must’ve not been able to speak for a whole week after recording this EP. Check with your own ears and you’ll know what I mean. If nothing else, it’s a full gust of fresh hardcore breeze for these times, which have so frequently and so intensely been exposed to hip-hop lately that one might not have realized how much the world missed some guitar-driven wall of sounds as well as good old screams and growls. I bet this EP can provide the same service to you, too.

Back to our regularly scheduled programme, which sees Kanye West and long-time protégé/wunderkid Cudi (see what I did there?) dropping one of the most highly-anticipated albums of the year on Friday 8th June – the third in the G.O.O.D. Music series –, synthesised for better of worse into mere seven tracks clocking in at just about 25 minutes (incipit: for those of you late to the party, a while back and amidst the whole MAGA-hat/Trump-endorsement drama, Kanye decided that albums have now just seven tracks, and stuck to this creative formula for his recent outputs, albeit making an exception with the last 8-track Teyana Taylor instalment). The excitement and thrill for this release got further cemented pretty quickly through incredibly positive early reviews of the project – above all a staggering and mega controversial 10/10 score by the Internet’s busiest music nerd Anthony Fantano – as well as all of those bells and whistles surrounding each of these recent Kanye-produced drops, including exclusive listening parties all over the USA, raining from his creative compound-ranch in Wyoming to hip neighbourhoods in Los Angeles. With that being said, my very personal expectations going into this album weren’t exactly sky-high, given the rather disappointing and surprisingly underwhelming ye record that preceded this (both TLOP and Yeezus are miles ahead), coupled with the recent radio silence from Kid Cudi as far as his creative outputs was concerned.

They say that one shall be best pleased when her expectations aren’t disproportionately high or shooting for the moon, and this I feel is exactly what happened with this record, as overall it’s quite literally an impressive and thorough artistic endeavour, ranging from off-the-wall experimentation and never-heard-before Kanye (“Feel the Love”), to precious, sensitive, gorgeous white gloved sampling (“Cudi Montage”). Right off the bat, one has to recognise and acknowledge Kid Cudi’s standout contributions to the overall aesthetic of this project, which for a great part could be reduced to his much-acclaimed and welcomed-back “humming” style of singing, but that in reality reaches out to so much more, adding a special je ne sais quoi, a triumphant coolness without even trying. Whilst opener “Feel the Love” is appointed with setting the record straight (another pun intended…), making way to a kickstarting palette of aggressive experimentation and welcoming back good ol’ Pusha T taking care of the main bars, it’s Cudi’s brilliant verse on “Fire” (“It’s so many days I prayed to God / All this pain, I couldn’t seem to find a way / On a mission livin’, carry on / Got my family, I’m seein’ through by the days / Never late, pull up a seat and come grab a plate / Check the date, let ’em hate“) that lends this project the feeling of an instant classic. Elsewhere, “Reborn” at number five (a good one, but largely overstaying its welcome) is a song very much up Kid Cudi’s alley, whereby the Cleveland, Ohio prodigy goes to dominate the melodic delivery and firmly grabs the rhythmic steering wheel, only to leave a smaller intermezzo to Kanye in the first half.

Track number three “4th Dimension” is a genius piece of patchwork by Ye, sampling an old jazzy refrain by Louis Prima that flows into a groovy and very tongue-in-cheek two and a half minutes stunner (“It feels so good, it should cost / Bought her alligator, I ain’t talkin’ Lacoste / Made me say, “Ugh, uh” / Like a mix of Master P and Rick Ross (uh, uh) / She seem to make me always feel like a boss (uh, uh) / She said I’m in the wrong hole, I said I’m lost (uh, uh)“), becoming a work of art that also best exemplifies how well Kanye and Cudi build on each other’s strengths, as if Kids See Ghosts had been a thing for decades and this was their watertight winning formula. Moving on, “Freeee (Ghost Town, Pt. 2)” displays an extremely interesting vibe with a grungy aesthetic almost bordering something that could’ve come out of a modern alternative rock production, with a stomping and captivating drum work glueing together some of the most gorgeous vocal harmonies the rap mainstream might have seen in a while.

Similarly – albeit overall coming across a little bland and too predictable – the self-titled track at number six offers, among other things, a chilling and almost Michael Jackson-esque harmonisation passage at 3:22, that suddenly opens up the whole track making it breathe and exhale a perfect ending climax. Last, but definitely not least, album wrapper “Cudi Montage” is close to pure Kids See Ghost perfection, the kind of song you’d play to an alien coming to visit planet earth asking what modern day rap should and ought to sound like. Sampling none other than Kurt Cobain off his posthumous Montage of Heck record, the cut carries a haunting and steely guitar lick progressing over a syncopated drum machine, accompanied by dark and caustic bars by Cudi first and then Kanye (perhaps their respective best verses on the whole album), flowing into a superbly liberating and outstanding self-help chorus.

Every streaming service and user music library will have this album categorised under the rap/hip-hop genre, and rightfully so, but when looking at it – or rather, listening to it – the elements that leave the strongest marks are actually found outside the typical hip-hop starter guide; like the wonderful singing melodies by both Ye and Cudi, the boundary-pushing genre-blending sampling experimentation, the sharp and witty lyrical content, or again Kanye and Kid Cudi’s innate ability to sound so well-oiled and complementary to one another. It’s thus virtually impossible to pigeonhole this project within specific genre/trend/mood tags, precisely because it’s so eclectic and charismatic, revealing previously undisclosed and different sonic elements with every new listen. Finally, another positive spillover effect projected to stem from this significant effort by the duo is the probable revival of the much-polarising and incredibly rich Kid Cudi catalogue, with many listeners likely to go back and revisit some of his older material, reinvigorated by his excellent humming form on this Kids See Ghosts LP. The same could certainly be said for Kanye West and his old repertoire, although in his case it does feel like there shouldn’t be any need whatsoever to do so, given that he took up this type of task completely on his own, a couple months back, as he started to hysterically generate buzz, controversy, and anticipation surrounding his whole private and artistic persona by heavily employing this generation’s favourite micro-messaging tool for single white males: Twitter. Please don’t @ me. 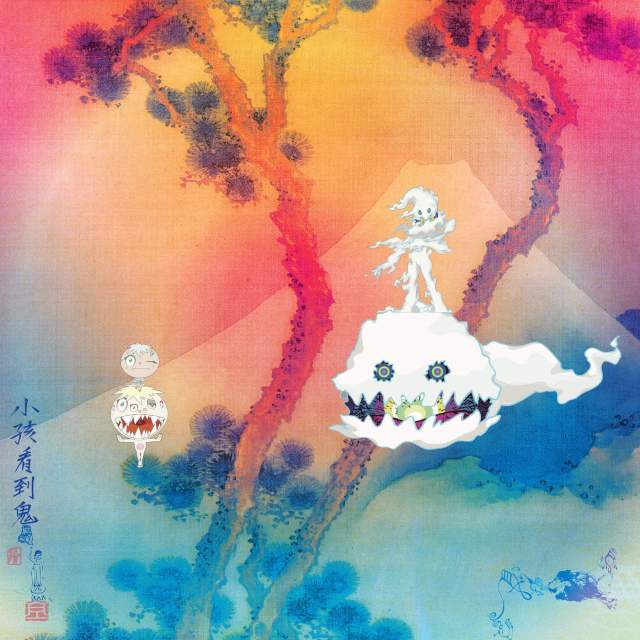